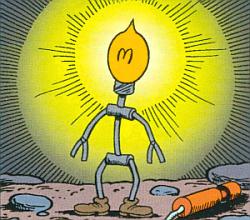 Meet The Helper, a slightly Reddy-inspired Donald Duck character. Well, maybe you’d already met him but I hadn’t. He’s been around since the 1950s and is “a kind of microbot.”

In Gyro’s First Invention Don Rosa shows that the Helper was constructed in 1952. He is built out of a lamp previous owned by Donald Duck. Some mysterious way the lamp became alive and intelligent when Donald accidentally hit Gyro in his head with it so that Gyro’s head hit his unfinished mindbox. Later Gyro gave the main part of the lamp mechanical legs and arms so that it could be able to cross obstacles. To avoid vibrations while moving it was also equipped with dolls shoes … and finally Donald put on a light-bulb so that it could light up its surroundings.

Pretty neat. Hat tip to Tom R. for pointing him out.