Check out the Gopher State Railway Museum’s train featuring Reddy Kilowatt as the engineer (scroll down after following the link). 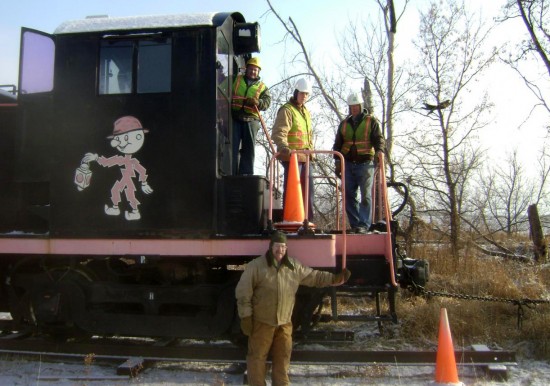 From Just a brief history — the locomotive was built in 1940 by Electromotive Corporation for the Chicago, Burlington & Quincy Railroad. NSP accquired the locomotive in approximately 1973 from the Burlington Northern Railroad, to switch its St Paul, Minnesota coal-fired High Bridge power plant, where it worked unitl 1996. It wore the slightly modified Reddy Killowatt figure from 1973 until it was retired in 1996. Because of its heritage and unique paint job, NSP generously donated the locomotive to the Gopher State Railway Museum (located in New Prague, Minnesota just south of the Twin City Metro area) where it now resides, still prominently featuring Reddy in his hard hat and railroad lantern in hand.

Thanks Jeff and Adam!