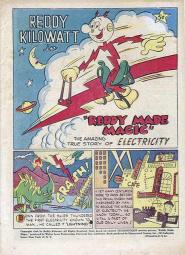 What do you get when you combine a famous commercial spokescharacter who’s gotta bolt of lightning jutting out from between his legs…dinosaurs…E.C. Comics…and the Hollywood studio responsible for “Woody Woodpecker” cartoons? How about “REDDY MADE MAGIC”, a comic book — that originally bore a cover-price of only a nickel! — starring ODDBALL icon REDDY KILOWATT as he tells us “the amazing true story of electricity”! Shocking stuff, eh?

REDDY KILOWATT IN “REDDY MADE MAGIC” is a glue-bound, 16-page — including pulp-pager “covers” — comic that’s not exactly a “giveaway” due to its “5¢” price tag. It’s the very first of a number of comics starring Reddy Kilowatt published over the years. It bears the description, “Story based on cartoon TECHNICOLOR motion picture, ‘Reddy Made Magic’, produced by Walter Lantz Productions, Universal City, California.”