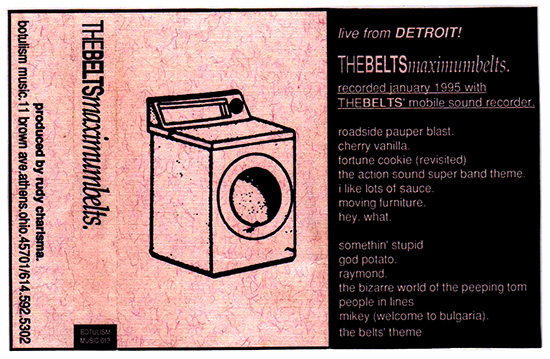 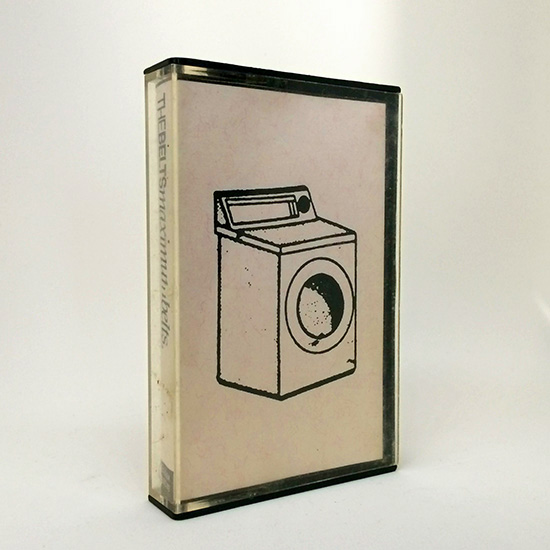 My last year in Athens, Ohio (1995) my friends and I went on a frenzy of home recording projects. Bands left and right. Beer and instruments everywhere. It was a blast.

The Belts were the first of my many forays over the next two years into “cassette culture” home recording. The Belts were myself and Josh Andra (aka Morgan the Lotus) recording in my room. This album probably was completed in just a couple days. While drinking Schitz. Then we played a show! Josh had been doing a lot of recording but I was a n00b (you’ll even hear the “Smoke On the Water” riff on one track, which was the extent of my guitar talents). For those of you unaccustomed to amateur music, this is a harsh listen. Pringles cans were used. Pots, pans, and spoons. Toys as well. The Wurlitzer guitar was missing at least two strings. Everything was recorded to tape on a two-track. It’s raw. I still love it even though we got much better over the next few months.

Anyway, the good folks at Botulism Music are releasing their entire back catalog of cassettes out to the Internet. This was release #012, recorded in January 1995 and now available at thebelts.bandcamp.com.

A somewhat accurate though thoroughly unreadable history is here: keaggy.com/rudycharisma.

And here are some videos.