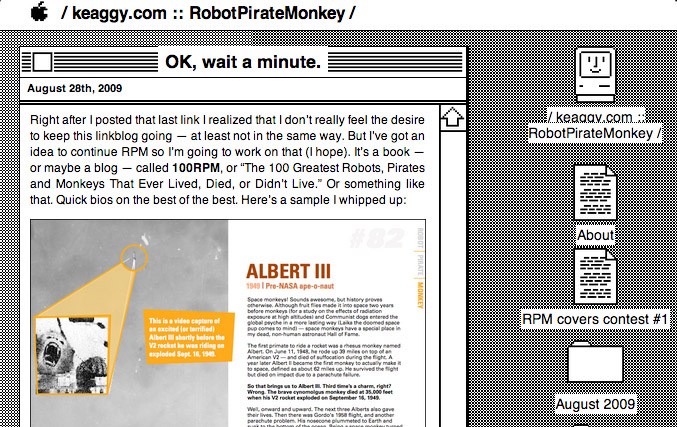 The purpose of this weblog is to record dumb things that happen in the XPLANE office or to XPLANErs. If you want. Like when we were at lunch today and someone complained about how robot costumes can be really uncomfortable. And then there were several murmers of agreement. Because, apparently, most of people at the table had been dressed up as robots before. I thought that was funny.

Update: RPM started out as a fun, nonsensical weblog for employees of XPLANE. A lot of the early posts (now categorized in “Various”) were not about robots, pirates or monkeys and were posted by different people. The blog eventually lost its home on XPLANE.com and found a new one here at keaggy.com. It literally became a repository for any and all robot, pirate, and/or monkey links that I found — selectively cataloguing the World Wide Web’s robots, pirates and monkeys. We didn’t give a crap about ninjas, well, at least not since 8th grade. We likes robots. We likes pirates. We likes monkeys. I shuttered it in 2009.

Update #2: sorry, had to take the site down in June 2016 due to WordPress spammers.


Billy & Diane
Back to Portfolio
The Grocery List Collection