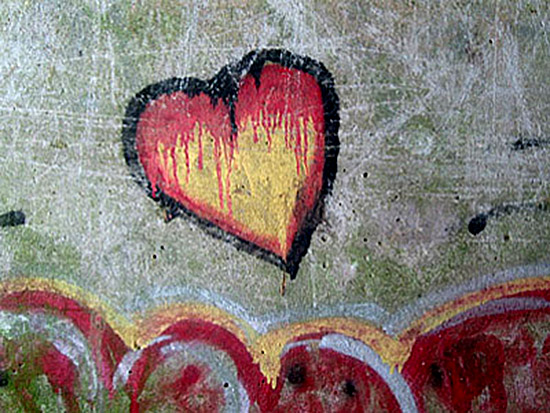 I’m a collector. But I don’t like to collect rare or expensive items. I like common stuff. It’s all about seeing the beauty in small things forgotten — about getting a glimpse of some tiny, everyday moment that lives on. With these photos, it’s the simple fact that someone was here before you were, and they had something to say. For one reason or another it got said in spray paint, or scratched or scrawled into something. Then it got left behind.

It’s not so much vandalism as thinking out loud. Well, in many cases it is vandalism. We see these public displays of affection every day. “I love Sue.” “Amber loves Sean.” “Led Zeppelin rules.” We see them so often that they’re easy to ignore.

But the great thing is that when you do notice them, they can set you to thinking. When I see them, I think that if someone’s going to say something for all the world to see, it’s great that they chose to say “I love you.”