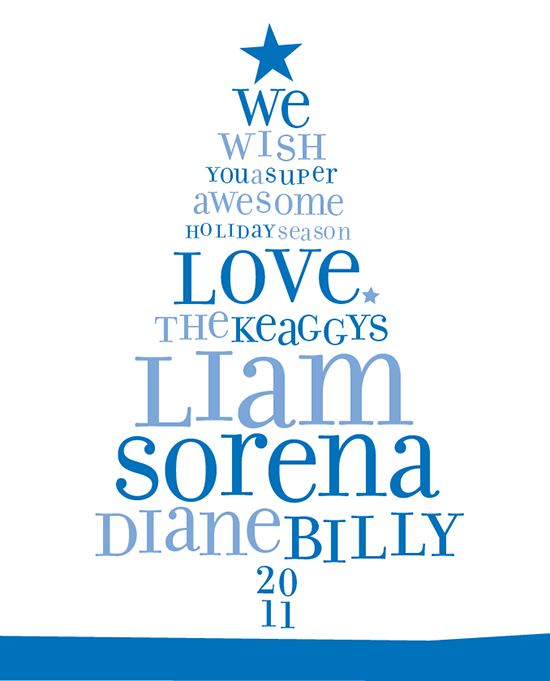 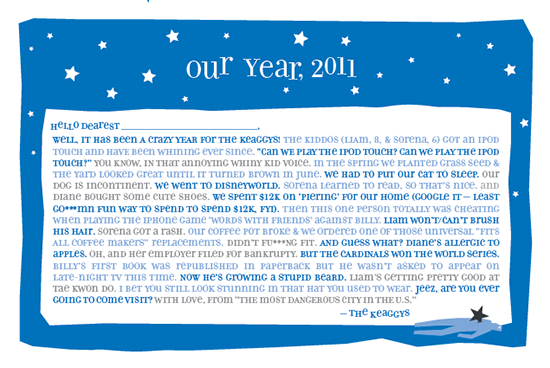 Well, it has been a crazy year for the Keaggys! The kiddos (Liam, 8, & Sorena, 6) got an iPod touch and have been whining ever since. “Can we play the iPod touch? Can we play the iPod touch?” You know, in that annoying whiny kid voice. In the spring we planted grass seed & the yard looked great until it turned brown in June. We had to put our cat to sleep. Our dog is incontinent. We went to Disney World. Sorena learned to read, so that’s nice. And Diane bought some cute shoes. We spent $12,000 on ‘piering’ for our home (Google it—least go***mn fun way to spend to spend $12k, FYI). Then this one person totally was cheating when playing the iPhone game ‘Words With Friends’ against Billy. Liam won’t/can’t brush his hair. Sorena got a rash. Our coffee pot broke & we ordered one of those universal “fits all coffee makers” replacements. Didn’t fu***ng fit. And guess what? Diane’s allergic to apples. Oh, and her employer filed for bankrupty. But hey, the Cardinals won the World Series. Billy’s first book was republished in paperback but he wasn’t asked to appear on late-night TV this time. Now he’s growing a stupid beard. Liam’s getting pretty good at Tae Kwon Do. I bet you still look stunning in that hat you used to wear. Jeez, are you ever going to come visit?

With love, from “the most dangerous city in the U.S.”

This actually was a design I shelved about 10 years ago. Hence the Filosofia font.